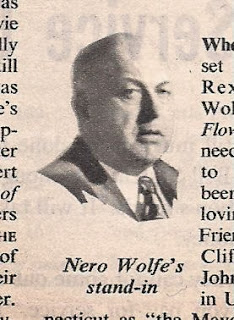 "When Thornton Utz . set about illustrating Rex Stout's Nero Wolfe mystery ("Omit Flowers') he needed a very big man to pose as Stout's beer-drinking, orchid-loving detective hero. Friends told him about Clifford L. "Tiny" Johnson, who is known in Utz's part of Connecticut as "the Mayor." Johnson is a 6-foot-4-inch 'mountain of a man who weighs 310 pounds and is "the mayor"i.e., First Selectman—of Fairfield Township, Conn. "Tiny" operates his own insurance agency in Fairfield, says his mayoral duties are not so arduous they would prevent him from posing for an artist, so he was delighted to stand in for Nero Wolfe. Unlike Wolfe, "Tiny" wouldn't cross the street for the rarest orchid in captivity, and, as far as he is concerned, his friends can "omit beer," too."


Have you met the female Nero Wolfe in the newly reprinted of the famous 1940s sleuth, Amy Brewster? If you love Wolfe, you will love Amy Brewster. Read Meet Amy Brewster only 99cents

(1945), Message from a Corpse (1945) and A Matter of Policy (1946). Amy Brewster is defined against the genre's stereotypes, particularly the femme fatale: she is not attractive, not home-bound, and not submissive, either conversationally or professionally." -Frances A. DellaCava and Madeline H. Engel, Female Detective in American Novels, A Bibliography and Analysis of Serialized Female Sleuths (1993).