Out Now: Pause For The Cat [A "Lucky Pierre" Mystery] By J. D. Crayne

Deerstalker Editions is extremely pleased to announce a brand-new "Lucky Pierre" Mystery by our celebrated and best-selling author  J. D. Crayne: Pause For The Cat! 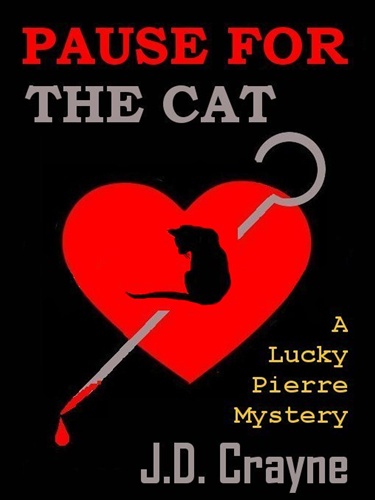 Lucky Pierre, that well-known cat about town, is back!  He was all settled down to enjoy his favorite occupations of napping and snacking when his humans, Jeremy and Linda Austin, land him in the middle of another murderous mess.  Honeysuckle House Bed and Breakfast, which the Austins own and run on sweat, tears, and a couple of shoestrings, is the site of a writer's salon organized by science fiction enthusiast Angela Griffin.  Honeysuckle House has been the site of several other unpleasant little mishaps, and this may be the last chance for the Austins to redeem their reputation and avoid closing down their business. Things are going fine until one of the writers turns up dead with a shish-kabob skewer stuck through his heart.  He was a drunk who beat his wife, so no one misses him much, even if he was a pretty good writer.  But when Angela Griffin proposes a toast to his memory and dies after drinking a poisoned glass of champagne, even Pierre has to admit that things are getting serious.  For one thing, these killings are interfering with his naps.  For another, they mess up his snack schedule. Detective Mark Stoddard joins forces with writer and amateur sleuth Gramps Derry, but neither of them are making much headway. Even Gramps' delectable granddaughter, Grub, is having a hard time seeing through the felonious fog. It's up to Pierre to uncover the vital clue that will keep the villain from killing again.  But can he? And once the mystery starts to unravel, will revealing the long-hidden secrets of the past keep the heartless killer from striking again?  This light-hearted romp through mischief, murder, and mayhem uncovers the innermost secrets of a writer's life, with everything from light-hearted infidelity through sugar cube bar bets and adventures in one-upmanship.

Out Now: The Raid - A Novel Of Nuclear Terrorism By Irv Eachus

If you like your thrillers to be extra-thrilling and your suspense extra-suspenseful you have to check out the The Raid by the best-selling Irv Eachus! 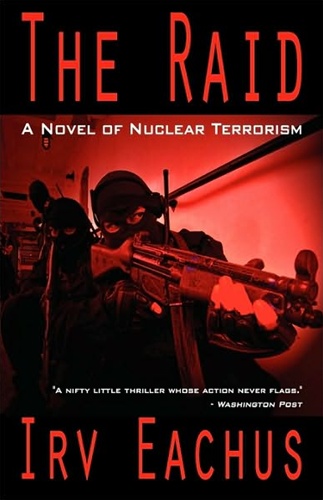 A highly-trained team of seven men and women seize a U.S. Navy nuclear cruiser docked at Long Beach and turn its number-one reactor into a weapon aimed at the millions of Southern Californians who live just miles from the dock. Opposing them are the ship's most unorthodox sailor and best reactor technician; the outspoken chief of base security who must decide whether to go in or give up; and the admiral's seventeen-year-old daughter, who discovers just how tough she can really be. Suspense and danger build until the stressï¿½in the people and the reactorï¿½cannot be contained. Here is a unique thriller with profound implications for the more than thirty million Americans who live in the dozen U.S. cities that harbor nuclear-powered ships. Also available in paperback. Irv Eachus served for eight years in the United States nuclear navy as a reactor control operator, technician, and senior instructor in the Reactor Training Division aboard the nuclear-powered cruiser USS Long Beach. He holds degrees in electrical engineering and in political science and is currently at work on a new techothriller, Blackout. "A strongï¿½plausible nuclear thriller. Authentic technical detail, solid characterization ï¿½ top drawer in this genre." -Kirkus Review. "Action is the key descriptive word for this first novel. Lots of action, a little sex and topical issues." -Library Journal. "...blood, sex, greed and intrigue ... a gripping, suspenseful novel of sabotage, treachery and nuclear blackmail that should keep readers turning pages well past bedtime." -Orlando Sentinel Star. (Check out our Irv Eachus Author Page.)

Out Now: Shadow Of The Dahlia By Jack Bludis


"Shadow of the Dahlia us a rousing story, compelling told. Forget about it being sent in the 40s; in Jack Bludis's expert hands, this novel transcends all that - it creates its own time, its own place, and is a wonderful read for anybody who loves a good book." -Warren Murphy, Two-time Edgar Winner

"With Shadow of the Dahlia, Jack Bludis proves he is a master of retro noir." -James R. Winter, Private Eye Writers of America newsletter.

"A new twist in a mystery read and kept my interest. The characters were well thought out and the author interwove them nicely within the storyline. There was mystery, adventure and a tad of romance. Well done and recommended." -Shirley Johnson, MidWest Book Review

Every cop in L.A. Robbery-Homicide is trying to find who killed Elizabeth Short, "The Black Dahlia." At the same time private-eye Rick Page is trying to locate a millionaire's missing wife. In the middle of that case, Page is unwillingly drafted to find a young man who wronged the daughter of a crime lord. Soon bodies tortured in the same manner as the Dahlia begin to pile up, and Page learns he is in deadly danger. To survive, he must discover if the murderer is a cunning copycat attempting to confuse the police, or whether he has fallen under the shadow of the Dahlia's killer.

"Shadow of the Dahlia is a marvelous private-eye novel set in the mid-1940s. The sounds and souls of a generation that survived both the Great Depression and World War II resonate from every chapter, and Rick Page comes across as a realistic and empathetic narrator. The book truly deserves the highest compliment I can pay: I felt that I was reading it in the 1940s, not that Jack Bludis was trying currently to write that way. Shadow of the Dahlia, may be a 'throwback' of a novel, but it is also a 'keeper' as a trophy." -Jeremiah Healy, author of Spiral and Turnabout