DEERSTALKER EDITIONS IS PLEASED TO ANNOUNCE THE FIRST REPRINTING IN 50 YEARS OF THE CLASSIC FIRST "WAR AGAINST THE MAFIA" SERIES, PREDATING THE EXECUTIONER BY A DECADE! "Glorious! The writing is good … with a firm command of craft, character, and plot." –Bill Crider, Anthony Award winning mystery writer. In the first book in this classic series, a former CIA spy behind the German lines in WW2 and secret agent fighting the Russian KGB in Europe during the Cold War, returns to the states to find himself up against the dirtiest plot ever against the U.S. Russia's top secret agent has infiltrated the country, making an unholy deal with the Mafia... $2

BOOK II
MOROCCO JONES: The Hand of the Syndicate 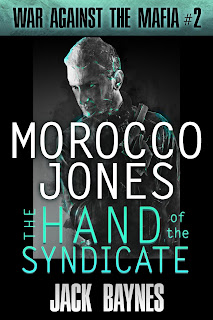 Morocco jones challenges the deadly power of the Mafia in a kill or be killed novel. The Syndicate made a big mistake when they murdered Chris Shane. Because Shane was the man who had saved Morocco from torture and death at the hand of a despot's most savage executioner back in Eastern Europe during the WWI... $2. 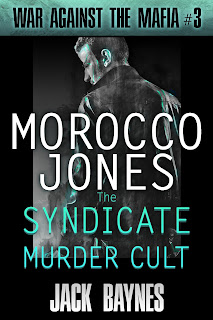 From the moment Morocco Jones hit Hollywood, things began to explode in some very strange and terrifying directions. There was the reception committee of musclemen who waylaid Morocco in the dark right outside his client's fancy Spanish villa. Next was the ex-hood who had become high-priest of a powerful and sinister religious cult that didn't draw the line at murder. Third was the scandal sheet that raked in the do-re-mi from the studios – for the truly scandalous stories it didn't print! Plus a crooked cop named Doheny… $2.

Note: We have changed the titles very slightly from the originals which seem to have been created by an inattentive editors,)